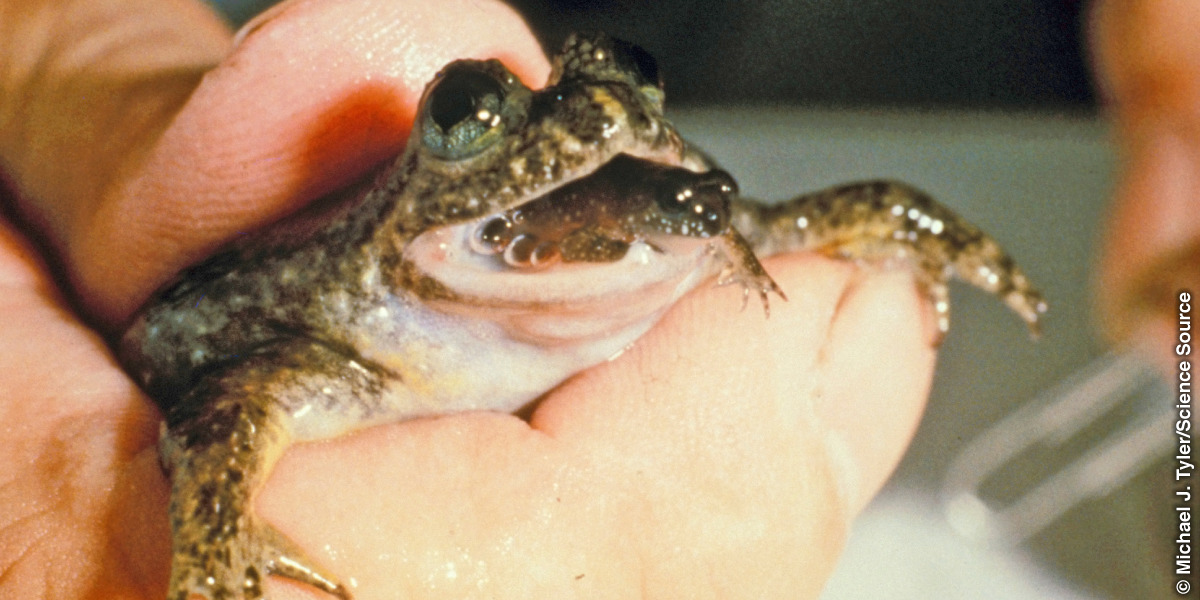 THE Australian gastric brooding frog had a bizarre means of reproduction. The female swallowed her fertilized eggs and incubated her young in her stomach for about six weeks. Her babies later emerged from her mouth as fully developed frogs.

To keep from digesting her eggs, it was necessary that the mother frog not only stop eating but also stop producing stomach acid. Evidently, chemicals released by the eggs and hatchlings inhibited the production of acid.

The mother would brood about two dozen eggs. By the time she gave birth, The young frogs stretched the mother’s stomach to the point that it completely compressed her lungs, forcing her to breathe through her skin.

The baby frogs would normally emerge over a period of days as they became ready. If the mother sensed danger, though, she would give birth by vomiting them out.

If, as some claim, its reproductive system evolved, the gastric brooding frog would have had to make vast changes to both its physical makeup and its behavior all at once. “It is inconceivable to contemplate a slow and progressive change in its reproductive biology,” wrote scientist and evolutionist Michael J. Tyler. “The habit is totally effective or it fails completely.” The only plausible explanation, Tyler says, is “a single, huge, quantum step.” Some would say that such a quantum step is called creation.

最初，上帝创造了天地。 - 创世记 1:1 In the beginning God created the heavens and the earth. - Genesis 1:1
我要赞颂你，因为我的受造奇妙可畏。你的作为奇妙，我是清楚知道的。 - 诗篇 139:14 I praise you because in an awe-inspiring way I am wonderfully made. - Psalm 139:14
自从创世以来，上帝那些看不见的特质，就是他的永恒力量和神性，都已清楚可见，从他所造的东西就能看出来... - 罗马书 1:20 For his invisible qualities are clearly seen from the world’s creation onward, because they are perceived by the things made, even his eternal power and Godship... - Romans 1:20
任何房屋都有人建造，但建造万物的就是上帝。- 希伯来书 3:4 Of course, every house is constructed by someone, but the one who constructed all things is God. - Hebrews 3:4